Last year, I did a bit of research on the internet and found mlpack. mlpack is fast and scalable machine learning library for C++ (Based on its definition on its website.). mlpack has the following features, which I think it worth the try.

First of all, I suggest you use a Linux distribution for machine learning projects. This is not just my opinion but some other developers and researchers also agree on using Linux. Besides, the installation of mlpack on Linux systems is fairly straightforward.

Here I explain how to install mlpack from source and also install its dependencies. First, you have to install Armadillo and Boost libraries. For Ubuntu and Debian, mlpack’s dependencies  can be installed through apt:

After the dependencies are successfully installed, you need to run following commands in terminal to install mlpack from source:

For more information about CMake configuration and etc, check out the installation tips in the documentation of mlpack.

mlpack has command-line programs for some ML algorithms and also C++ API. In this section, I give an example for both of them. random forest algorithm was chosen for this purpose.

Similar to mlpack docs, covertype dataset will be used for usage examples. the dataset has 100K samples and 7 classes.  In short, this dataset is about predicting forest cover types from cartographic variables.

To download the dataset and unpack it, run the following commands:

Make sure that you have downloaded the dataset. otherwise, you cannot follow the examples below.

One of the interesting features of mlpack is that it has command-line programs that help you split the dataset and use a machine learning algorithm without writing C++ code.

In this example, first, we split the dataset into train and tests sets, which contains 70% and 30% of samples, respectively. To do so, run the following commands:

Next, we train a random forest classifier with the following command:

I ran the “mlpack_random_forst” command on my system and training accuracy was 95.87 percent. Note that a random forest model is saved as well. Hence we can predict the test samples using the saved model. Now, run the following commands to predict the labels of the test samples:

After running the above command, I achieved an accuracy of 84.4 percent on test samples, which is lower than training accuracy as expected. If you have done this example,  You might probably notice that mlpack is quite fast as it is advertised. On my Ubuntu system, I trained an RF model on 70K samples in about 10 seconds, which is pretty good. Moreover, I created a bash script here so that you can see the whole CLI example in one place.

I used random forest classifier as an example. However, mlpack has also other command-line programs for various ML algorithms. For more information, check out mlpack’s documentation. Next, I explain how to use mlpack C++ API for training a random forest model on the covertype dataset.

In this section, I assume that you have basic knowledge of C++ language so that you can follow the below example. First, create a cpp file named “rf-mlpack.cpp” with the following command:

As you might have guessed, the first step is to add mlpack headers files at the beginning of the C++ code as follows:

Above header files are needed to spit the dataset and also train a Random Forest Model. Next, we define the main function, which is a little bit different from a typical C++ program. mlpack has its own main function which accepts command line arguments. However, you are not forced to use this.

The first step is to load the dataset into an Armadillo matrix. Make sure that you use the correct path to the dataset.

Similar to CLI example, we split the dataset into train and test sets in C++:

After initializing an instance of RF classifier, it can be trained with the dataset and specified hyper-parameters as follows:

Next, we predict the labels of the test samples with the following code:

The last step is to compute the accuracy of the trained RF classifier.

And also don’t forget to free up the memory when you’re done.

After you wrote the entire example in the “rf-mlpack.cpp” file, you can compile the file using the following command:

Finally, run the generated executable to see the results:

On my Ubuntu system, I achieved an accuracy of 82.24 percent on test samples. Also, the execution time was about 10 seconds.

As you’ve seen in this example, mlpack’s C++ interface is somewhat clean and simple. We trained and tested a classifier in several lines of code.  In the next section, I compare the scikit-learn’s random forest with that of mlpack in terms of speed.

I used scikit-learn quite often for my projects as it is probably the most popular ML library out there. Thus I decided to compare scikit-learn’s random forest classifier with that of mlpack in terms of computational time. However, bear in mind that this is NOT an extensive comparison between the two libraries. Moreover, I do NOT say one library is better than the other.  I just wanted to conduct an experiment for my curiosity.

Before presenting the results of the benchmark, I should briefly demonstrate my system spec, which is shown in the below table:

It should be noted that the above usage examples are run on this system.

I ran the random forest classifier 5 times in both libraries. The mean of 5 trials are shown in the below figure: 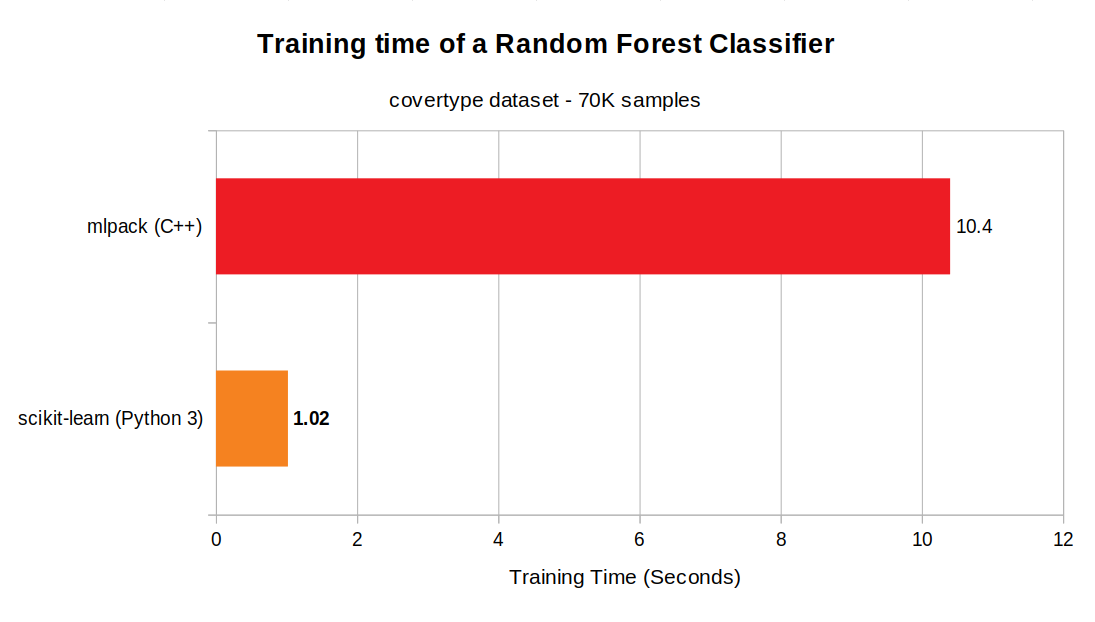 scikit-learns’s random forest classifier is 10 times faster than that of mlpack, which is quite odd! I had actually expected mlpack to be faster. Because it is implemented in C++ and uses Armadillo and OpenMP. As a result, mlpack uses several cores of a CPU when one trains an RF classifier.  However, scikit-learn’s RF classifier runs on one core! Moreover, the hyper-parameters in this experiment were the same for both scikit-learn and mlpack. I should do a bit of research soon to find out why the benchmark results are drastically different. I guess that this is probably due to the difference in algorithm or implementation.

So far we have looked at the mlpack library.  Usage example for both CLI programs and C++ API were given. As you’ve seen, mlpack’s useful  CLI programs help you run ML algorithms quickly without writing code. Moreover, mlpack provides somewhat easy-to-use C++ API that helps you train and test a classifier in several lines of C++ code. (If you are a C++ programmer, I suggest you explore mlpack more than I did in this post.) I also made a limited comparison between the scikit-learn and mlpack in terms of speed using random classifier. However, benchmark results need further investigation as it was unexpected and odd!

In the end, I should mention that both the usage examples including the benchmark code can be downloaded on GitHub here.  If you have questions or problems, let me know by leaving a comment below. Moreover, I’d like to know your opinion on the benchmark I did above.